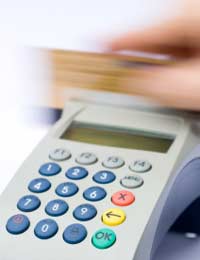 You’ve probably noticed the shiny black stripe on the back of your credit card. This is one of the most important parts of your card and allows users to pay for goods and services instantly, just by swiping! This is the part of your card that’s “read” by electronic machinery, and the part that passes your information to retailers in a fraction of a second.

Who Invented the Magnetic Strip?

What Exactly is it?

The reason you have a magnetic strip on your credit card is that it allows all sorts of information to be transferred quickly and easily to the retiler and your credit card company. Swiping your card sends all the information embedded in that stripe to the central tracking and billing system of the retailer you are making a purchase from. There is an incredible amount of information available in this thin, plastic stripe, be careful what you do with it, all this information is about you!

Each magnetic stripe is made up of several tracks full of microscopic magnetic particles. These particles can be formatted to represent certain types of information. You might be surprised to find out that a great deal of your history and personal information is on this stripe. Most importantly, one of the tracks on your magnetic strip holds your PIN, your country code, including its form of currency, and the amount that you’ve been authorized to spend.

The machine that reads all this information is called a magstripe reader. Problems can and do arise when cards are swiped causing frustration for both credit card users and retailers. The most frequent issue is when cards become de-magnetised by being kept in close contact with another magnet or credit card; or from being scratched. If these things happen, the minute magnets in the plastic strip can become dislodged, which destroys the code and renders your card “invalid”. Sometimes, a second or third swipe of yoru card will rectify any problem, but more often than not your card will have to be replaced.

How is your Card Security Checked?

When you use your credit card, there’s a process that needs to be followed to make sure that you aren't a fraudster, and that it really is your card. Retailers also check that you haven’t overspent your limit, and that you have sufficient funds available to make your proposed transaction. Smaller merchants commonly do this by phone, although new technology is enabling merchants to do this electronically, and instantly. This technology comes in the form of an EDC (electronic data capture), which does exactly this - capture your data and sends it to the central credit card computer system.