How Credit Cards are Made 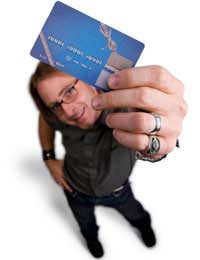 Credit cards are made from several layers of plastic laminated together by heavy duty machinery. The core is usually made from a plastic resin known as polyvinyl chloride acetate (PVCA). This resin is then mixed together with opacifying materials, dyes, and plasticisers to give the desired appearance and consistency. This core material is laminated with thin layers of PVCA or clear plastic materials which adhere to the core when the correct amount of pressure and heat are applied.

Various inks and dyes are used for printing credit cards, with some manufacturers even using special magnetic inks to print the magnetic stripe on the back of the card, made by dispersing metal oxide particles in solvents.

The Production of Credit Cards

The production of credit cards is a multi-stage process. First of all, the plastic core and laminate materials are compounded and cast into sheet form. Next the core is the printed with the relevant information and subsequently the laminates are applied to the core. Finally the assembled sheet is cut into individual cards by special, highly accurate cutting machinery.

How are Credit Cards are Made?

The plastic for the core sheet is made by melting and mixing polyvinyl chloride acetate with other additives. The blended components are then transferred to an extrusion molding apparatus which forces the molten plastic through a small flat orifice known as a die. As the sheet exits the die, it goes through a series of three rollers stacked on top of each other that pulls the sheet along. These rollers keep the sheet flat and maintain the thickness. The sheets may then pass through additional cooling units before being cut into separate sheets by saws, shears, or hot wires. The cut sheets then enter a sheet stacker that stacks them into place and stores them for subsequent operations.

The laminate films used to coat the core stock are made by a similar extrusion process. These thinner films may be made with a slot cast die process in which a molten plastic film is spread on a casting roller. The roller determines the film's thickness and width. Upon cooling the films are stored on rolls until ready for use.

How are Credit Cards Printed and Laminated?

The plastic core of the credit cards is the part printed with text and graphics. This is done using a variety of common silk screen printing processes. In addition, one of the laminate films may also undergo subsequent operations where it is imprinted with magnetic ink. Alternately, the magnetic stripe may be added by a hot stamping method. The magnetic heads used to code and decode the iron oxide particles can only operate if the magnetic medium is close to the surface of the card, so the metal particles must be placed on top of the laminating layer. Upon completion of the printing process, the core is ready to be laminated.

Lamination helps protect the finish of the card and increases its strength. In this process, sheets of core stock are fed through a system of rollers. Rolls of laminate stock are located above and below the core stock. These rolls feed the laminate into the vacuum shoes along with the core stock. The vacuum holds the three pieces of plastic together while they travel to a tacking station. At the tacking station a pair of quartz infrared heat lamps warm the upper and lower plastic films. These lamps are backed with reflectors to focus the radiant energy onto a narrow area of the films, which optimises a smooth bonding of the film to the core stock. The laminate films are then fully bonded to the core stock by pressing with metal platens, which are heated to 266° F (130° C) and applied with a pressure of 166 psi/sq inch. This lamination process only takes about three minutes.

After lamination has been completed, the finished assembly is cut and completed by die cutting methods. Each assembly yields a sheet, which is cut into 63 credit cards. This is achieved by first cutting the assembly longitudinally to form seven elongated sections. Each of the seven sections is then cut and trimmed to form nine credit cards. In subsequent operations, the card is embossed with account numbers. The finished cards are then prepared for shipping, usually by attaching the card to a paper letter with adhesive.